On September 22, 2015, day of the murder of palestinian Hadil, Marcel Leme, International Human Rights Observer, was leaving the city of Hebron in Palestine to return to Brazil. He was a few meters from the scene. His photos have been used by the international media and his name kept anonymous for security reasons, because it was still in territories controlled by Israel. Upon arriving in Brazil contacted the Blog Sanaúd-Voltaremos and presented the written and photographic report of his testimony.

While international media agencies tried to pass the Israeli version that the palestinian Hadil is a terrorist, Marcel was there, watching and photographing the killing of Hadil, an innocent Palestinian that at no time had some kind of reaction to the approach of Israeli soldiers in one of the Checkpoint imposed on Palestinians by Israel in the city of Hebron and in more than hundreds of Palestinian villages.

Follows the testimony of an act of terrorism of the State of Israel:

Testemony about the Palestinian woman’s murder in Hebron (Palestine) on the 22nd September 2015.

On 22nd September 2015, at 07:43 am, I observed a Palestinian woman crossing the Checkpoint 56, at the entrance of Shuhada Street in Hebron. She passed through the checkpoint, the metal detector did peep and, as usual, one of the two Israeli soldiers who were standing there asked the woman to stop walking. Firstly he spoke something in Hebrew, but as she was an Arabic speaker, the soldiers also tried to communicate to her in English, shouting at her “Stop, stop!” and “Move back!”. Immediately she stopped walking and turned around to him. At this moment the distance between the woman and the soldier was about 2 meters away. She was totally covered by a black burqa, even her face was covered, and the soldier was totally scared since she had crossed the checkpoint. Then the soldier pointed the gun at her and seemed have asked the woman to open her bag for checking. (Picture 1 – 7:44 am) 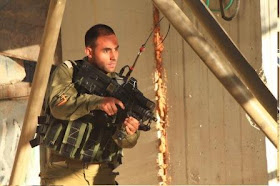 While she was trying to open her bag, the Israeli soldier made her move slowly towards the metal barrier on the exit way of the checkpoint. The soldier made it by pointing the gun at the woman and shouting something in Hebrew at her. During that, the distance between them was always about 2 meters away. The soldier remained very scared about her. (Picture 2 – 7:44 am) 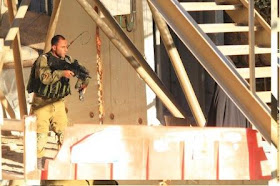 Immediately the second soldier also pointed the gun at her. The distance between the woman and second soldier was also about 2 meters away. As the soldiers had asked her, the woman started moving slowly towards the metal barrier. She remained always silent, quiet and she never got closer to any soldier. (Picture 3 – 7:45 am) 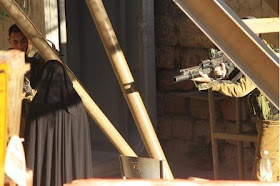 When she arrived near the metal barrier, which is about 1.2 meter high, the Israeli soldiers asked her again to open her bag. Firstly it seemed that she did not understand what the soldiers wanted from her, especially because they were shouting at her in Hebrew, so she did not move and did not even reply to the soldiers. She was totally still and froze. Then both soldiers shot at the ground. Immediately after the shots, the soldiers shouted something in Hebrew at her again, so the woman tried to open her bag to show them what there was inside it. Before she opens completely her bag, the soldier on her left side started shooting towards the woman. At this moment the distance between her and the both soldiers was about 3 meters away. The Israeli soldier shot some three times towards her, but I could not realize if the bullets hit the woman or not. Just after the three bullets have been shot, the woman continued standing near the metal barrier. With no reaction to the shots, she remained silent, quiet and did not move. The souldiers continued shouting something at her in Hebrew. In the same minute a Palestinian man was arriving at the checkpoint intending to cross to H1 area (Bab Al-Zawiye). Immediately he got closer to the woman, stood just behind her and seemed has asked the soldiers to stop shooting. He spoke something in Hebrew with them and made some gestures with his hands suggesting to them to stop shooting. The woman turned around to Palestinian man, she remained standing at the same place and showed her back to the soldiers. The Palestinian man was talking to her in Arabic, he was probably trying to explain her the situation and what the soldiers wanted from her, because the woman seemed does not understand Hebrew. (Picture 4 – 7:45 am) 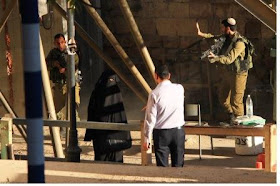 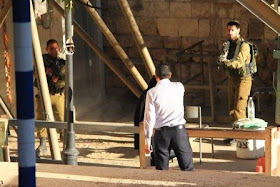 Scared because of the shots, the Palestinian man moved away from the woman, standing about 2 meters away from her. After the shots, she remained standing, did not react, speak, scream or shout. Her only reaction was: she started walking very slowly to the exit way of the checkpoint, which leads to H1 area (Bab Al-Zawiye), on the other side of the metal barrier. (Picture 6 – 7:45 am) 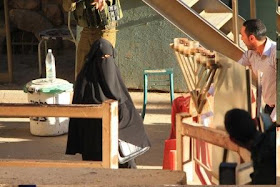 While she was walking slowly on the other side of the metal barrier, intending to cross the checkpoint back to H1 area (Bab Al-Zawiye), the soldiers shouted something at her in Hebrew. She immediately stopped walking and looked at them. It seemed the woman was not understanding what they wanted from her, so she remained still, silent and froze. At this moment there were four Israeli soldiers in the scene. The woman was standing about 4 meters away from all of them and now there was a metal barrier about 1.2 meters high between the woman and the soldiers. (Picture 7 – 7:46 am) 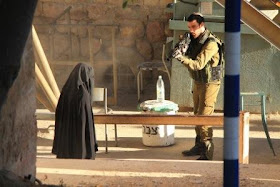 The woman remained froze on the other side of the metal barrier, behind her there was a wall. She did not move, speak, scream or react. She has never tried to attack any soldiers and did not even get closer to them. Then the Israeli soldiers started opening fire at her some five or six times. The soldiers were now about 3 meters away from her. (Pictures 8 and 9 – 7:46 am) 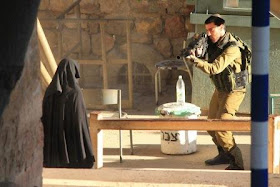 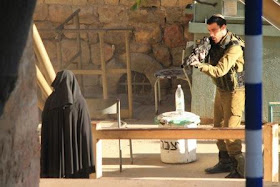 After has been shot many times, the Palestinian woman remained standing for some seconds, then, suddenly, she fell down on the ground. At this moment two more soldiers ran to the scene. Now there were six Israeli soldiers around her. (Picture 10 – 7:46 am) 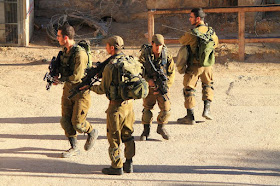 Just after the woman has fell down on the ground, a soldier came to her and shot at her when she was laying down on the ground. At this moment the distance between the victim and the Israeli soldier was about 1.5 meter away. (Picture 11 – 7:47 am) 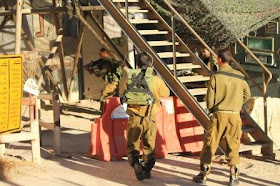 The Palestinian woman remained laying down on the ground after has been shot many times by the soldiers. She fell down on the ground on the exit way of the checkpoint, which goes to H1 area (Bab Al-Zawiye) and the Israeli soldiers shot her from the other side of the metal barrier. She was totally unconscious and did not move. There was no knife on the ground around her. (Picture 12 – 7:47 am / Picture 13 – 7:48 am) 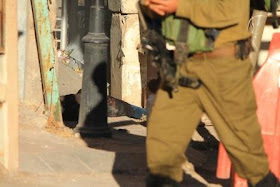 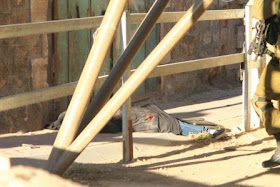 The six soldiers who were in the scene started walking around the woman and they seemed do not know what to do about that. Five minutes after she has been shot by the Israeli soldiers and has fell down on the ground, they started talking to each other and one of the soldiers made a phone call. (Pictures 14 and 15 – 7:52 am) 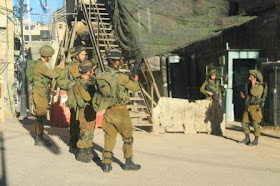 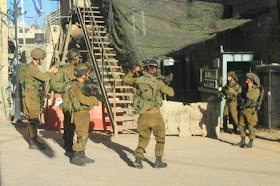 Just after the phone call, many soldiers and Israeli policemen came to the scene. They were standing around the victim, taking pictures of her and making some phone calls. I remained standing in the scene and nobody said nothing to me. No one was allowed to get closer to the scene, except for the Israeli settlers who arrived in the scene eight minutes after the Palestinian woman has been shot by the soldiers and has fell down on the ground. (Pictures 16 and 17 – 7:55 am) 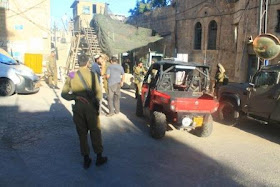 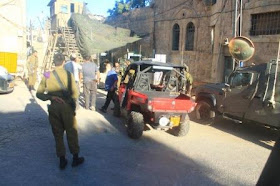 At 7:59 am a man from the Israeli medical care arrived in the scene, but he did not provide first aid, he just looked at the victim and made a phone call. At this moment the Israeli settlers, soldiers and policemen were talking to each other and taking pictures of the Palestinian woman, who was unconscious and laying down on the ground. (Picture 18 – 8:01 am) 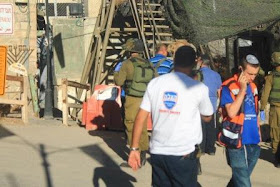 At 8:01 am the soldiers dragged the woman’s body under the metal barrier and pulled her to the other side of the metal barrier, where the Israeli soldiers were standing during all the incident and where they shot her from. In the same minute the victim came back to conscious and moved slowly her head. Immediately the Israeli soldiers pointed the guns at her, but she fell unconscious again. (Picture 19 – 8:01 am) 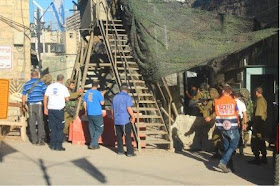 Then the Israeli settlers stood around her and started gathering and taking pictures of the woman again. The soldiers took off her black veil, so that they could see her face and take pictures of her. (Pictures 20 and 21 – 8:03 am / Picture 22 – 8:05 am) 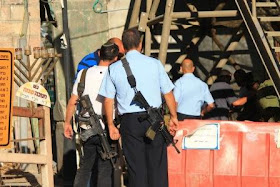 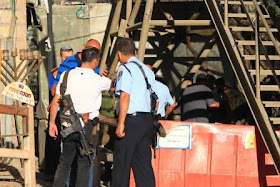 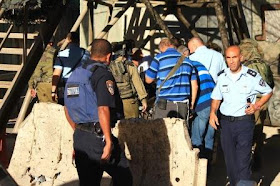 Twenty minutes after the Palestinian woman has been shot by the soldiers and has fell down on the ground, the policemen moved away the Israeli settlers who were standing around her and isolated the area around the victim. I could not see any medical care. Then one policeman came to me and asked me to leave the area. I took the last picture from the scene and went up the street which goes up to Tel Rumeida. Then I joined the crowd who was standing behind the soldier’s blockade, which was about 40 meters away from the scene. (Picture 23 – 8:07 am) 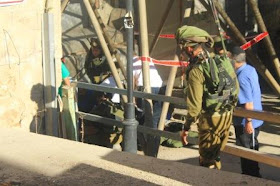 I was standing at the checkpoint before the woman has crossed it, I could see all the incident from a distance of about 7 to 8 meters away, always walking around the scene to try to find a safe place and a better angle to witness and take the pictures. I left the area at 8:07 am, 24 minutes after the woman has crossed the checkpoint and 20 minutes after she has fell down on the ground because of the shots.

The name of the victim was published later by media as Hadil al-Hashlamun, a 18 years old Palestinian woman. The Palestinian man who tried to help her is Fawaz Abu 'Easheh.

I would like to emphasize that the victim has never tried to attack any Israeli soldiers, she has never tried to raise a knife and she has never gotten close to any soldiers since she has crossed the Checkpoint 56 to when she was shot many times by the Israeli soldiers and fell down unconscious on the ground. Before, during and after the incident I have not seen any knife with the woman or around her on the ground.